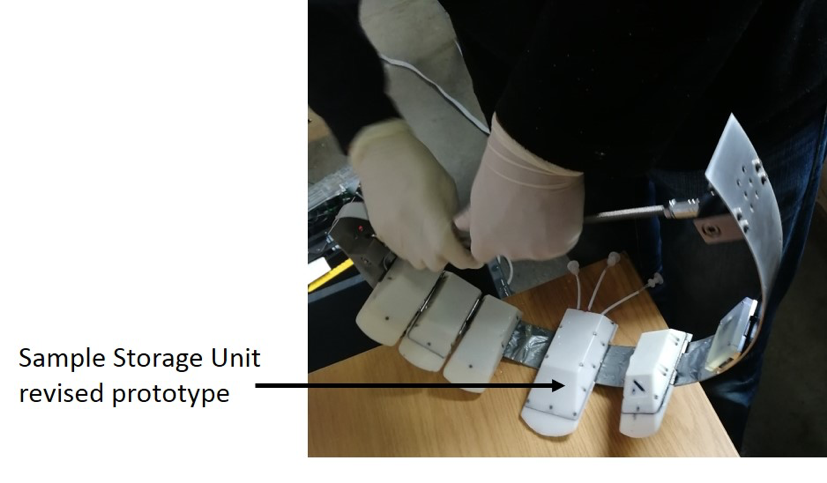 The main objective of this WP was to develop the microfluidic systems for chemical sensing and sample storage which was accomplished at 100%. During the first period of the project, several architectures of the passive microfluidic system were developed and evaluated. As a consequence, WP4 members managed to have the 1st prototype of the passive microfluidic Lab-on-a-Chip (LOC) ready to be evaluated in PM14 (four month early than the due date). As a result from the evaluation, it was established that the passive approach was prone to clogging in such an environment, sewage and therefore not suitable for the project. We hope this will aid future scientist in avoiding repeating the same strategy we took as the important impact of clogging was not foreseen at the level it should have been. Nevertheless, the research carried out opened the gate for many other applications since the cost-effective, low-power consumption, easy to- operate and miniaturized LOC presented can be used for in-situ and real-time potentiometric measurements in flowing water locations. Using the same strategy, one can include almost any kind of electrochemical sensor in the LOC and perform water quality assessment in situ and real time for environmental applications such as, quality controls in a river, aqua culture outlets or “off shore” fish cages among other.

During the second and third period in the project, the first and revised prototypes of the Sensing and Sample Storage Unit based on active microfluidics were produced and evaluated. The Sample Storage Unit was demonstrated to be robust and to work reliably: the sampling time is short (15 s), the cross-contamination was eliminated and the volume of collected sample (1.5 mL) is enough for analysis on portable GCMS as well as for future analysis in forensic laboratory. Therefore, it is ready to be implemented in future Micromole devices (TRL5 was reached). The Sensing Unit was also improved and the fluidic approach was demonstrated to work efficiently and to be adapted to the application. However it is unclear how dilution affects the behaviour of the chemical sensor which might cause false positive results. Also a long time of analysis is a significant disadvantage of the Sensing Unit and at the moment the device in such a level of matureness cannot be used in Micromole device. Moreover in its current state it also seems like the chemosensing requires a blank wastewater sample for comparison. The general conclusion is that chemosensing based on MIPs, as a method for target substance detection in such complex matrix of sewage water is not an efficient and accurate method at the moment.